A lightweight inversion of control container for TypeScript & JavaScript apps # 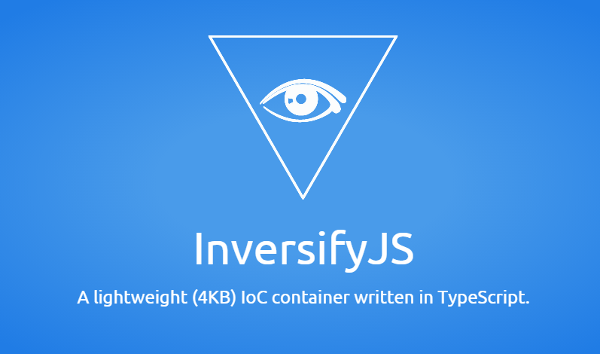 A few months ago I started to think about the possibility of creating a requireJS TypeScript fork in order to add dependency inversion (DI) support.

After some time thinking about it, I decided that mixing a dependency loader and an inversion of control (IoC) container wasn’t the best idea (based on the S, the single-responsibility principle, in SOLID principles). So I started to create a stand-alone IoC container for TypeScript & JavaScript apps.

With those two influences in mind I started to develop InversifyJS. InversifyJS is a lightweight (4KB) inversion of control container for JavaScript apps. It is written in TypeScript, has a really simple API and can be used with multiple frameworks and module loaders. InversifyJS can be used in front-end apps (Web browsers) and back-end apps (NodeJS).

Working with InversifyJS is really easy and only requires 3 simple steps:

In TypeScript we can define classes and interfaces like the following:

The class FooBar expects two parameters to be passed as arguments to its constructor. The types of these two arguments are the interfaces FooInterface and BarInteface.

So FooBar has a dependency on two abstractions (interfaces) and not concretions (classes) as the D (the Dependency Inversion principle) in the SOLID principles recommends.

The names of the arguments are relevant here. They need to match the interfaces names because the names are used by the IoC container to identify and inject the dependencies of a class.

Note: In the next release I will add a change so the name of the arguments are no longer relevant and minifiers will be able to rename the function parameters and InversifyJS will still be able to inject the right services.

When compiled into JavaScript the class FooBar looks as follows:

The interfaces are not emulated at run-time they are simply removed when we compile our code into JavaScript.

We can then create an instance of the InversifyJS kernel.

Once we have a kernel instance ready we can define some type bindings. We can set a binding by using the kernel bind method.

A type binding (or just a binding) is a mapping between a service type (an interface), and an implementation type (a class) to be used to satisfy such a service requirement.

If we attempt to bind an interface to a class that is not an implementation of that interfaces we will get a compilation error.

In JavaScript we will lose the interfaces (including the nice implementation check at compilation time).

When we define a type binding we can optionally define the desired scope. The default scope is transient but InversifyJS also supports singleton scope.

I decided to not implement transaction scope support but I will implement a much more powerful feature: contextual binding.

Contextual binding will allow us to declare constrained bindings:

To achieve this we will use decorators:

You may have noticed that the class FooBar is implementing the FooBarInterface interface.

The kernel will then create an instance of FooBar (as we indicated in the type binding). Because the FooBar constructor has two dependencies (the interfaces FooInterface and BarInteface) the kernel will resolve them as well and inject them into the FooBar class via its constructor.

Once more, in JavaScript everything is identical but interfaces are removed.

Our application dependency tree should have one unique root element, known as the application composition root, which is the only place where we should invoke the resolve method.

Invoking resolve every time we need to inject something, as if it was a Service Locator, is an anti-pattern. If we are working with an MVC framework the composition root should be located in the application class, somewhere along the routing logic or in a controller factory class.

For example, in the official marionette integration example, the composition root is the main.ts. This is the only place in the entire application where the resolve method id invoked.

With InversifyJS we can centralize all the type bindings in one single configuration file. For example, in the official marionette integration example, the Kernel configuration is centralized in the inversify.config.ts file.

Please refer to the integration examples if you need additional help.

If you want learn more about InversifyJS (or contribute) please visit www.inversify.io.

A powerful IoC container for JavaScript apps powered by TypeScript I released InversifyJS 1.0 about a year ago. Back then it had some nice features like transient and singleton scope but it was far from what I wanted to achieve.... Continue →