Implementing SOLID and the onion architecture in Node.js with TypeScript and InversifyJS

The following section describes some software design principles and design patterns that we must learn to be able to understand the onion architecture.

The separation of concerns (SoC) principle #

Concerns are the different aspects of software functionality. For instance, the “business logic” of software is a concern, and the interface through which a person uses this logic is another concern.

The separation of concerns is keeping the code for each of these concerns separated. Changing the interface should not require changing the business logic code, and vice versa.

SOLID is an acronym that stands for the following five principles: 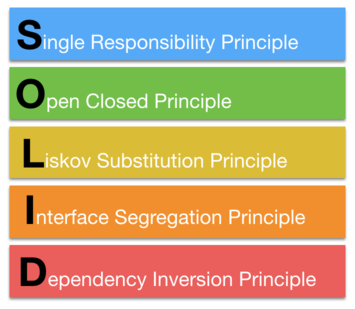 A class should have only a single responsibility

The most effective way to break applications is to create GOD classes.

A God class is a class that knows too much or does too much. The God object is an example of an anti-pattern.

God classes keep track of a lot of information and have several responsibilities. One code change will most likely affect other parts of the class and therefore indirectly all other classes that use it. That, in turn, leads to an even bigger maintenance mess since no one dares to do any changes other than adding new functionality to it.

The following example is a TypeScript class that defines a Person; this class should not include email validation because that is not related to a person behavior:

We can improve the class above by removing the responsibility of email validation from the Person class and creating a new Email class that will have that responsibility:

Making sure that a class has a single responsibility makes it per default also easier to see what it does and how you can extend/improve it.

Software entities should be open for extension, but closed for modification.

The following code snippet is an example of a piece of code that doesn’t adhere to the open/close principle:

The preceding code snippet allows us to calculate the area of two shapes (Rectangle and Circle). If we try to add support for a new kind of shape we will be extending our program. We can certainly add support for a new shape (our application is open for extension), the problem is that to do so we will need to modify the getArea function, which means that our application is also open for modification.

The solution to this problem is to take advantage of polymorphism in object-oriented programming as demonstrated by the following code snippet:

The new solution allows us to add support for a new shape (open for extension) without modifying the existing source code (closed for modification).

Objects in a program should be replaceable with instances of their subtypes without altering the correctness of that program.

The Liskov substitution principle also encourages us to take advantage of polymorphism in object-oriented programming. In the preceding example:

We used the interface Shape to ensure that our program is open for extension but closed for modification. The Liskov substitution principle tells us that we should be able to pass any subtype of Shape to the getArea function without altering the correctness of that program. In static programming languages like TypeScript, the compiler will check for us the correct implementation of a subtype (e.g., if an implementation of Shape is missing the area method we will get a compilation error). This means that we will not need to do any manual work to ensure that our application adheres to the Liskov substitution principle.

Many client-specific interfaces are better than one general-purpose interface.

The interface segregation principle helps us prevent violations of the single responsibility principle and the separation of concerns principle.
Let’s imagine that you have two domain entities: Rectangle and Circle. You have been using these entities in your domain services to calculate their area, and it was working very well, but now you need to be able to serialize them in one of your infrastructure layers. We could solve the problem by adding an extra method to the Shape interface:

Our domain layer needs the area method (from the Shape interface), but it doesn’t need to know anything about serialization:

Our infrastructure layer needs the serialize method (from the Shape interface), but it doesn’t need to know anything about the area:

The problem is that adding a method named serialize to the Shape interface is a violation of the SoC principle and the single responsibility principles. The Shape is a business concern and being serializable is an infrastructure concern. We shouldn’t mix these two concerns in the same interface.

The Interface segregation principle tells us that many client-specific interfaces are better than one general-purpose interface, which means that we should split our interfaces:

Using the new interfaces, we are implementing our domain layer in a way that is completely isolated from infrastructure concerns like serialization:

In the infrastructure layer we can use a new set of entities that deal with serialization:

Using multiple interfaces instead of one general-purpose interface has helped us to prevent a violation of the SoC principle (the business layer doesn’t know anything about serialization) and the Single responsibility principle (we don’t have a class God class that knows about both the serialization and the calculation of the area).

We can argue that RectangleDTO and rectangle Rectangle are almost identical and they are a violation of the “Don’t repeat yourself” (DRY) principle. I don’t think it is the case because while they look the same, they are related to two different concerns. When two pieces of code look alike, it doesn’t always mean that they are the same thing.

One should depend upon abstractions, [not] concretions.

Implementing the SOLID principles in a programming language that doesn’t support interfaces or in a programming paradigm that doesn’t support polymorphism is very unnatural. For example, implementing the SOLID principles in JavaScript ES5 or even ES6 feels very unnatural. However, in TypeScript, it feels as natural as it can be.

The MVC design pattern separates an application into three main components: the model, the view, and the controller. 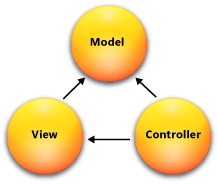 In small applications, the model is often a conceptual separation instead of a physical one. For example, if the application only reads a dataset and sends it to the view, the application does not have a physical model layer and associated classes. In that case, the dataset takes on the role of a model object.

Views are the components that display the application’s user interface (UI). Typically, this UI is created from the model data. An example would be an edit view of a Products table that displays text boxes, drop-down lists, and checks boxes based on the current state of a Product object.

Controllers are the components that handle user interaction, work with the model, and ultimately select a view to render that displays UI. In an MVC application, the view only displays information; the controller handles and responds to user input and interaction. For example, the controller processes query-string values and passes these values to the model, which in turn might use these values to query the database.

The MVC pattern helps you create applications that separate the different aspects of the application (input logic, business logic, and UI logic) while providing a loose coupling between these elements. The pattern specifies where each kind of logic should be located in the application. The UI logic belongs in the view. Input logic belongs in the controller. Business logic resides in the model. This separation helps you manage complexity when you build an application because it enables you to focus on one aspect of the implementation at a time. For example, you can focus on the view without depending on the business logic.

The repository and the data mapper design patterns #

A repository issues the appropriate queries to the data source, and then it maps the result sets to the externally exposed business entities. Repositories often use the Data Mapper pattern to translate between representations.

Repositories remove dependencies that the calling clients have on specific technologies. For example, if a client calls a catalog repository to retrieve some product data, it only needs to use the catalog repository interface. For example, the client does not need to know if the product information is retrieved with SQL queries to a database or Collaborative Application Markup Language (CAML) queries to a SharePoint list. Isolating these types of dependences provides flexibility to evolve implementations.

The onion architecture divides the application into circular layers (like an onion): 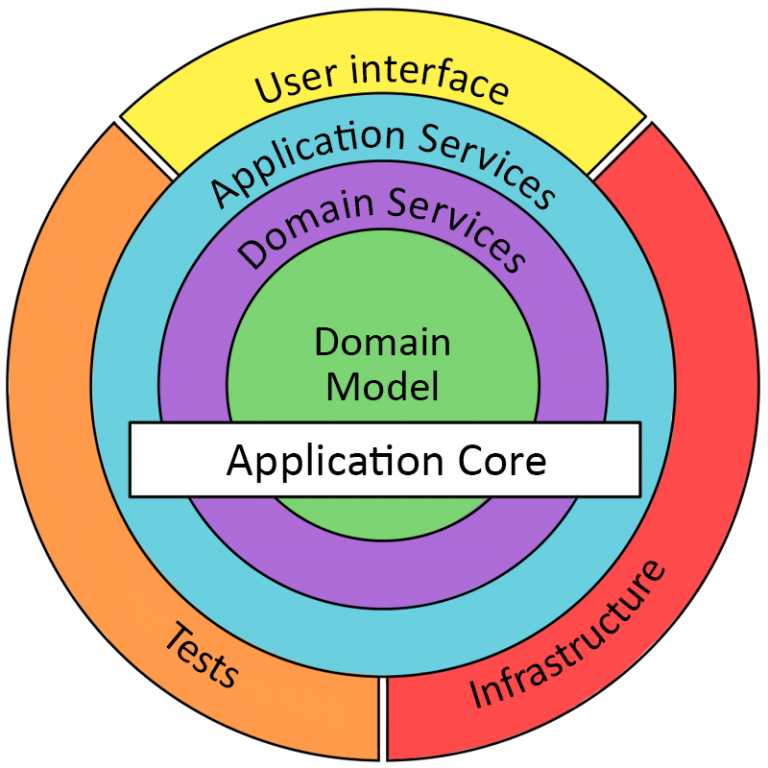 The central layer is the domain model. As we move towards the outer layers, we can see the domain services, the application services and, finally, the test, infrastructure, and UI layers.

In DDD, the center of everything is what is known as “the domain” The domain is composed of two main components:

In functional programming, one of the main architecture principles is to push side-effects to the boundaries of the application. The onion architecture also follows this principle. The application core (domain services and domain model) should be free of side effects and implementation details, which means that there should be no references to things like data persistence (e.g., SQL) or data transportation (e.g., HTTP) implementation details.

The domain model and domain services don’t know anything about databases, protocols, cache or any other implementation-specific concern. The application core is only concerned about the characteristics and rules of the business. The external layers (infrastructure, test and user interface) are the ones that interact with the system resources (Network, Storage, etc.) and is where side-effects are isolated and kept away from the application core.

The separation between layers is achieved via the usage of interfaces and the application of the dependency inversion principle: Components should depend upon abstractions (interfaces) not concretions (classes). For example, one of the infrastructure layers is the HTTP layer which is mainly composed of controllers. A controller named AircraftController can have a dependency on an interface named AircraftRepository:

AircraftController is part of the infrastructure layer and its main responsibility is dealing with HTTP related concerns and delegate work to the AircraftRepository The AircraftRepository implementation should be completely unaware of any HTTP concern. At this point, our dependency graph looks as follows: 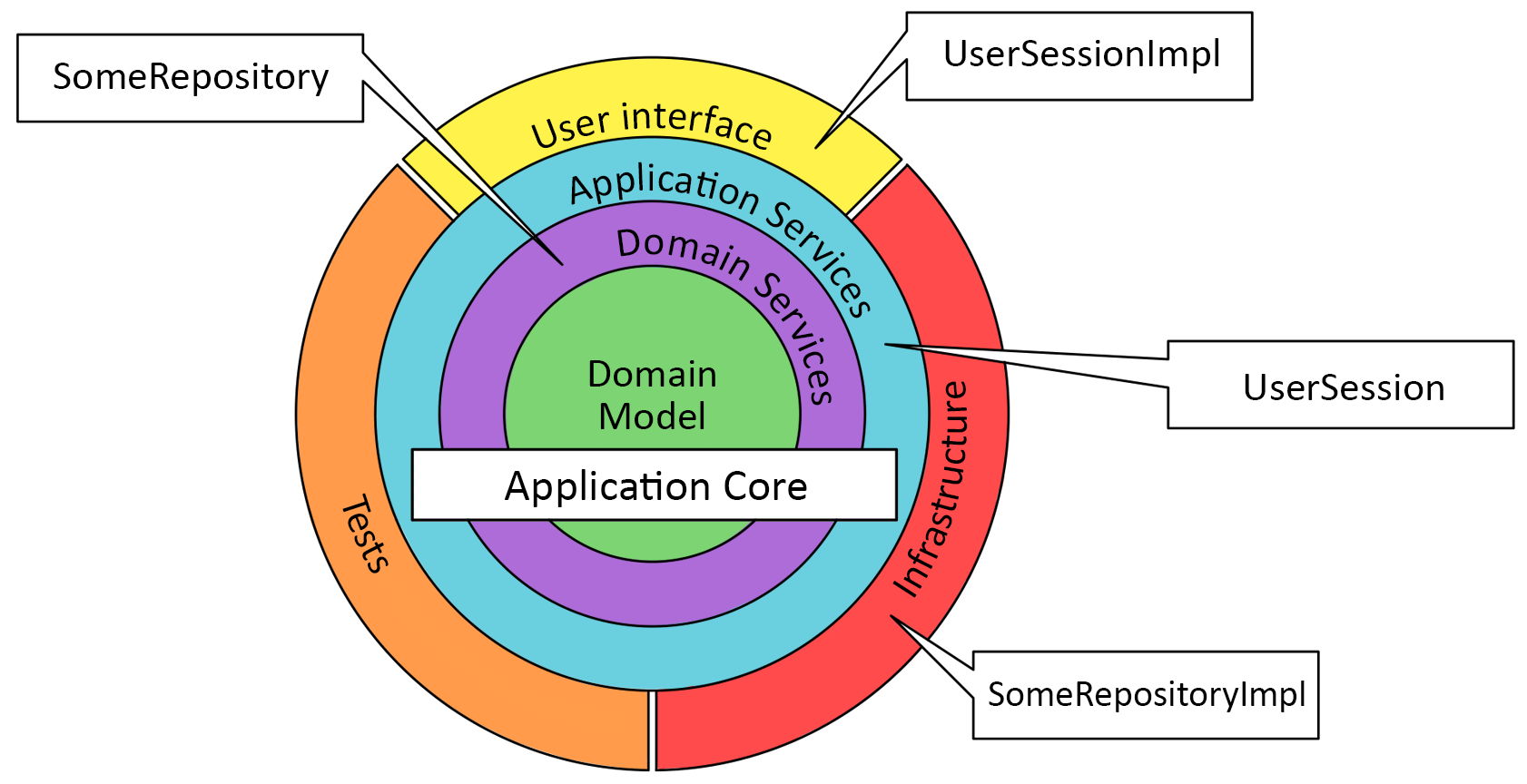 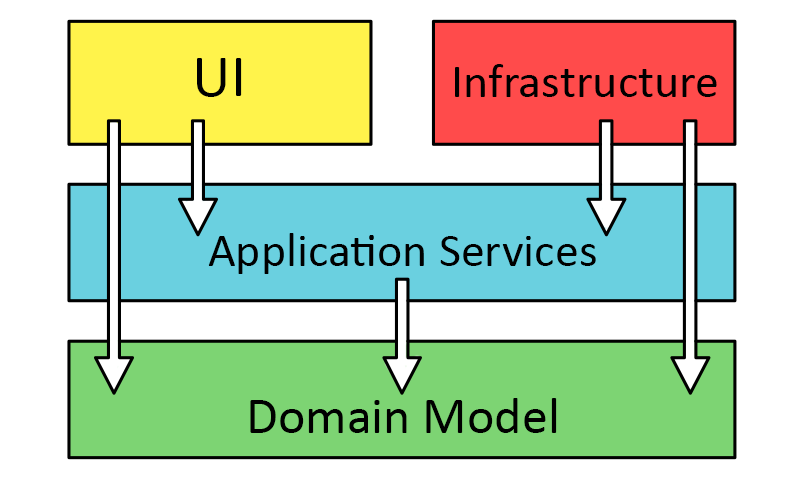 We use the AircraftRepository interface to decouple the domain layer from the infrastructure layer at design time. However, at runtime, the two layers must be somehow connected. This “connection” between interfaces and implementation is managed by InversifyJS. InversifyJS allow use to declare dependencies to be injected using the @inject decorator. At design time, we can declare that we wish to inject an implementation of an interface:

At runtime, InversifyJS will use its configuration to inject an actual implementation:

We will now take a look at the AircratRepository and Repository<T> interfaces which is part of the domain services layer.

At this point, our dependency graph looks as follows:

We now need to implement the Repository<T> interface and the AircraftRepository interface:

This particular Repository<T> implementation expects an EntityDataMapper and a TypeOrmRepository to be injected via its constructor. Then it uses both dependencies to read from the database and map the results to domain entities.

We also need the EntityDataMapper interface:

We use the EntityDataMapper to map from the entities returned by the TypeOrmRepository to our domain entities. At this point, our dependency graph looks as follows: 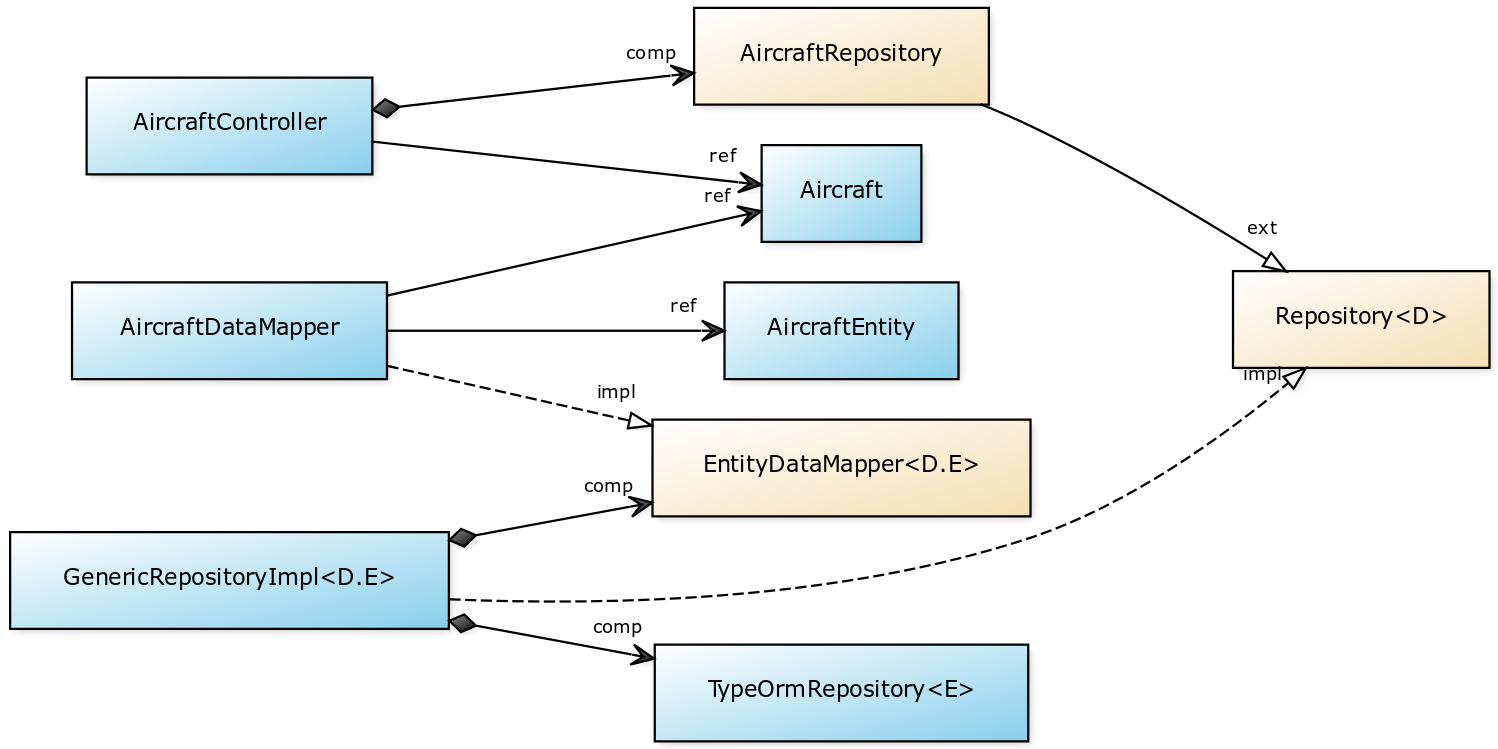 We can finally implement AircraftRepository:

At this point, we are done, and our dependency graph looks as follows:

The following diagram uses colors to identify a component that belongs to the domain layer (green) and components that belong to the infrastructure layer (blue):

I hope you enjoyed the article! Please let me know your thoughts via Twitter at @RemoHJansen.

Book review: A Philosophy of Software Design by John Ousterhout

I recently finished reading A Philosophy of Software Design by John Ousterhout and I thought that it would be useful to share my opinion about it with the community. My motivation for picking up this book was that I saw that it is one of... Continue →